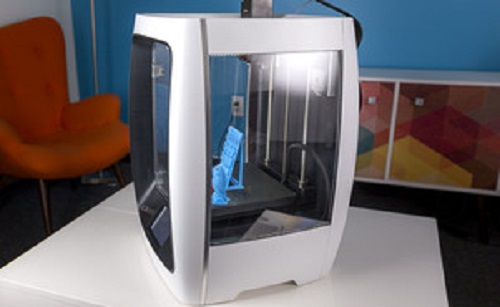 Whether for personal, professional, or educational use, 3D printers are more affordable than ever 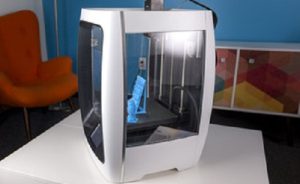 Barely a decade ago, 3D printers were hulking, expensive machines reserved for factories and well-heeled corporations. They were all but unknown outside the small circles of professionals who built and used them. But thanks largely to the RepRap open-source 3D printing movement, these amazing devices have become viable and affordable products for use by designers, engineers, hobbyists, schools, and even curious consumers.

If you’re in the market for one, it’s important to know how 3D printers differ from one another so you can choose the right model. They come in a variety of styles, and may be optimized for a particular audience or kind of printing. Preparing to take the plunge Here’s what you need to consider.

What Do You Want to Print?

Tied into the matter of what you want to print is a more fundamental question: Why do you want to print in 3D? Are you a consumer interested in printing toys and/or household items? A trendsetter who enjoys showing the latest gadgetry to your friends? An educator seeking to install a 3D printer in a classroom, library, or community center? A hobbyist or DIYer who likes to experiment with new projects and technologies? A designer, engineer, or architect who needs to create prototypes or models of new products, parts, or structures? An artist who seeks to explore the creative potential of fabricating 3D objects? Or a manufacturer, looking to print plastic items in relatively short runs? 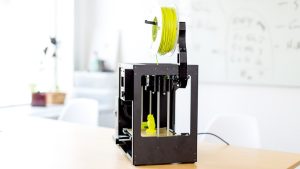 Your optimal 3D printer depends on how you plan to use it. Consumers and schools will want a model that’s easy to set up and use, doesn’t require much maintenance, and has reasonably good print quality. Hobbyists and artists may want special features, such as the ability to print objects with more than one color, or to use multiple filament types. Designers and other professionals will want outstanding print quality. Shops involved in short-run manufacturing will want a large build area to print multiple objects at once. Individuals or businesses wanting to show off the wonders of 3D printing to friends or clients will want a handsome yet reliable machine.

For this guide, we will focus on 3D printers in the sub-$4,000 range, targeted at consumers, hobbyists, schools, product designers, and other professionals, such as engineers and architects. The vast majority of printers in this range build 3D objects out of successive layers of molten plastic, a technique known as fused filament fabrication (FFF). It is also frequently called Fused Deposition Modeling (FDM), although that term is trademarked by Stratasys, Inc. A few use stereolithography—the first 3D printing technique to be developed—in which ultraviolet (UV) lasers trace a pattern on a photosensitive liquid resin, hardening the resin to form the object.

What Size Objects Do You Want to Print?

Make sure that a 3D printer’s build area is large enough for the kind of objects that you intend to print with it. The build area is the size, in three dimensions, of the largest object that can be printed with a given printer (at least in theory—it may be somewhat less if the build platform is not exactly level, for example). Typical 3D printers have build areas between 6 and 9 inches square, but they can range from a few inches up to more than 2 feet on a side, and a few are actually square. In our reviews, we provide the build area in inches, in height, width, and depth (HWD).

What Materials Do You Want to Print With?

The vast majority of lower-priced 3D printers use the FFF technique, in which plastic filament, available in spools, is melted and extruded, and then solidifies to form the object. The two most common types of filament by far are acrylonitrile butadiene styrene (ABS) and polylactic acid (PLA).

Each has slightly different properties. For example, ABS melts at a higher temperature than PLA and is more flexible, but emits fumes when melted that many users find unpleasant, and needs a heated print bed. PLA prints look smooth, but tend to be on the brittle side. 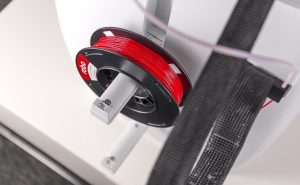 Other materials used in FFF printing include, but are not limited to, high-impact polystyrene (HIPS), wood, bronze, and copper composite filaments, UV-luminescent filaments, nylon, Tritan polyester, polyvinyl alcohol (PVA), polyethylene terephthalate (PETT), polycarbonate, conductive PLA and ABS, plasticized copolyamide thermoplastic elastomer (PCTPE), and PC-ABS. Each material has a different melt point, so use of these exotic filaments is limited to printers designed for them, or ones with software that lets users control the extruder temperature. 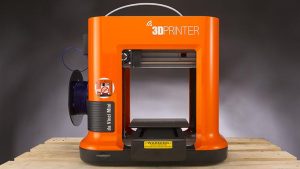 The Best 3D Printers of 2017 January 2017 Update – XYZprinting da Vinci Mini Filament comes in two diameters (1.85mm and 3mm) with most models using the smaller-diameter filament. Filament is sold in spools, generally 1kg (2.2 pounds), and sells for between $20 and $50 per kilogram for ABS and PLA. Although many 3D printers will accept generic spools, some companies’ 3D printers use proprietary spools or cartridges. Make sure that the filament is the right diameter for your printer, and that the spool is the right size. In many cases, you can buy or make (even 3D print) a spool holder that will fit various spool sizes. (For much more on 3D printing filaments, check out our explainer.)

Stereolithography printers can print at high resolutions and eschew filament in favor of photosensitive (UV-curable) liquid resin, which is sold in bottles. Only a limited color palette is available: mainly clear, white, gray, black, or gold. Working with liquid resin and isopropyl alcohol, which is used in the finishing process for stereolithography prints, can be messy.

How High of a Resolution Do You Need?

A 3D printer extrudes successive thin layers of molten plastic in accordance with instructions coded in the file for the object being printed. For 3D printing, resolution equals layer height. Resolution is measured in microns, with a micron being 0.001mm, and the lower the number, the higher the resolution. That’s because the thinner each layer is, the more layers are needed to print any given object, and the finer the detail that can be captured. Note, however, that increasing the resolution is sort of like increasing a digital camera’s megapixel count: Although a higher resolution often helps, it doesn’t guarantee good print quality. 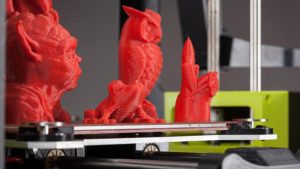 Higher resolution comes at a price, as you’ll usually pay a premium for printers with resolutions higher than 100 microns. Another downside of increasing the resolution is that it can add to print times. Halving the resolution will roughly double the time it takes to print a given object. But for professionals who require the highest quality in the objects they print, the extra time may be worth it.

The field of 3D printing for consumers and hobbyists is still in its infancy. The technology has been evolving at a rapid rate, making these products ever more viable and affordable. We can’t wait to see what improvements the coming years bring.

Do You Want to Print in Multiple Colors?

Some 3D printers with multiple extruders can print objects in two or more colors. Most are dual-extruder models, with each extruder being fed a different color of filament. One caveat is that they can only print multicolored objects from files that have been designed for multicolor printing, with a separate file for each color, so the areas of different colors fit together like (three-dimensional) jigsaw puzzle pieces.

What Surface Should You Build On?

The importance of the build platform (the surface on which you are printing) may not be apparent to 3D printing newbies, but it can prove critical in practice. A good platform will let an object adhere to it while printing, but it should allow for easy removal when the printing is done.

The most common configuration is a heated glass platform covered with blue painter’s tape or a similar surface. Objects stick to the tape reasonably well, and they are easy to remove when completed. Heating the platform can prevent the bottom corners of objects from curling upward, which is a common issue, especially when printing with ABS.

With some build platforms, you apply glue (from a glue stick) to the surface, to give the object something on which to adhere. This is workable, as long as the object can easily be removed after printing. (In some cases, you have to soak both platform and object in warm water for the object to come loose.) 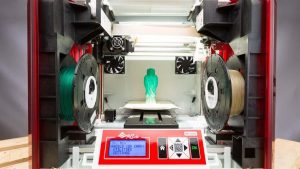 A few 3D printers use a sheet of perforated board with tiny holes that fill with hot plastic during printing. The trouble with this method is that although it will hold an object solidly in place during printing, the object may not easily come loose afterward. Using a thumb tack or an awl to push the plugs of hardened plastic out of the perforations to free the object and/or clean the board is a time consuming process, and can damage the board.

Do You Need a Closed Frame?

Closed-frame 3D printers have an enclosed structure with a door, walls, and a lid or hood. Open-frame models provides easy visibility of print jobs in progress, and easy access to the print bed and extruder. A closed-frame model is safer, keeping kids and pets (and adults) from accidentally touching the hot extruder. And it also means quieter operation, reducing fan noise and possible odor, especially when printing with ABS, which can exude what some users describe as a burnt-plastic smell.

How Do You Want to Connect to the Printer?

With most 3D printers, you initiate the printing from a computer via a USB connection. Some printers add their own internal memory, which is an advantage because they can keep a print job in memory and continue printing even if the USB cable is disconnected or the computer is shut down. A few offer wireless connectivity, either via 802.11 Wi-Fi or a direct, peer-to-peer link. A downside of wireless is that, because 3D printing files can be up to 10MB in size, it can take much longer to transfer them. Another connection method that we have seen is Ethernet.

Many 3D printers have SD card slots from which you can load and print 3D object files using the printer’s controls and display, while others have ports for USB thumb drives. The advantage of printing directly from media is that you don’t need a computer. The downside is that they add an extra step, in transferring the files to your card. Typically, wireless, SD card, or USB thumb-drive connectivity is offered in addition to basic USB cable, although a few models offer one or more of those options.

What Software Do You Need?

Today’s 3D printers come with software on a disk or as a download. It’s Windows compatible, and in many cases can work with macOS and Linux as well. Not long ago, 3D printing software consisted of several parts, including a printing program that controlled the motion of the extruder, a “healing” program to optimize the file to be printed, a slicer to prepare the layers to be printed at the proper resolution, and the Python programming language.

These components were derived from the RepRap open-source tradition that spurred the development of low-cost 3D printers, but today 3D printer manufacturers have integrated these programs into seamless user-friendly packages. Some 3D printers allow you to use separate component programs if you prefer.

Below are the best 3D printers that we’ve reviewed recently. They cover a wide range in price, features, and printing methods, but they all represent quality. For more information on what 3D printing is, and how it works, our primer is a good place to start. And be sure to check out our roundup of the best overall printers.

1 thought on “3D Printing: Now Not Just for Professionals”